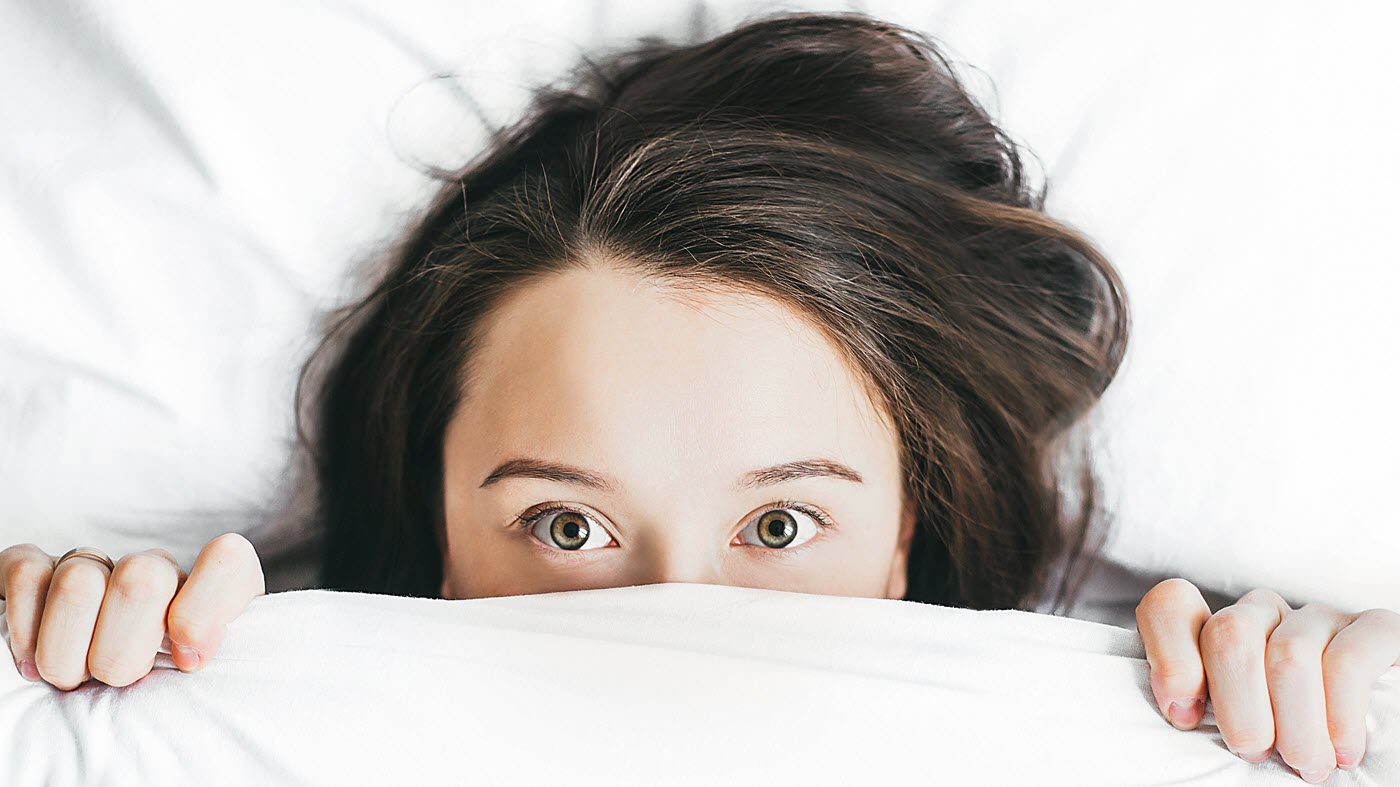 Image by Alexandra Gorn via Unsplash

I resolved ten years of chronic insomnia in under one week.

If you’re like me, you’re probably thinking, yeah, right. You’re skeptical. You think, big changes like that take time. You wonder who’s paying me to sell their “miracle” product (the answer: nobody). You wonder what kind of stuff I’m smoking.

At the very least, you need to see some evidence to back up this crazy writer’s anecdotal claim.

But if you’re like me, if you’ve tried, unsuccessfully, for years to establish consistent and healthy nights of slumber, you’ll want to read on because, like me, you’ll try anything to get your dreams back. And if you’re like 90% of patients from Gregg D. Jacobs’ studies, your sleep will improve if you follow his program.

Sleep deprivation is no stranger to new parents, and for me, sleep disturbance brought on by my baby’s arrival triggered the beginning of chronic insomnia. During my son’s first six months, my insomnia was so out of control that I felt like my body had forgotten how to sleep. I ended up on two types of medication that I’m only now, 10 years later, able to wean myself off of. I didn’t like the pills solution, but at the time, I felt desperate, with my basic functioning and mental health at stake, and nobody had anything else to offer, beyond recommending some basic “sleep hygiene” behaviors that I was already doing.

Gregg D. Jacobs’ book, Say Goodnight to Insomnia, was a game changer for me, with information I wish I’d had 10 years ago. I read the book in one day and within four nights, I had reestablished good-enough sleep. That was several weeks ago, and the changes are holding.

Jacobs pioneered a system through his 20-year research study at Harvard Medical School. His study followed adults with 10+ years of insomnia who had tried medication and psychotherapy with no results. 100% of participants reported their sleep improved after the six-week program, and 90% were able to cut down or completely eliminate sleeping medications. Because the program is primarily about changing thinking and behavior, it fits into a therapeutic modality known as Cognitive Behavioral Therapy, or CBT, now cited by the New England Journal of Medicine, the Lancet, Consumer Reports, the National Institutes of Health, and the American Psychological Association as the gold standard treatment for insomnia.

Jacobs educates his audience, presenting little-known facts about sleep and insomnia, information that I firmly believe every human should learn at a young age. What I learned in the book empowered me in my quest for restorative shut-eye, and I’m relieved I can finally put this issue to bed.

Here are my takeaways from the book:

Fact: The longest your sleeping pills will work is six weeks.

This was news to me. Jacobs strongly advises against using sleeping pills because their long-term efficacy is highly questionable and the side effects and problems are many.

I had the misperception that those two medications were enabling me to sleep, in part because every time I tried going off them, my insomnia would return. But I discovered that “rebound insomnia” is actually a withdrawl symptom, and I’m now off one of the meds, confident I’ll be off the other within several months.

Taking medication to sleep increases dependency and fear around not being able to sleep without it. Confidence, I’ve learned, is half the battle.

Fact: Jacobs found no evidence that sleep loss has any major health effects.

I found this astonishing, as I had gone through what felt like hell in those early months of new motherhood. But Jacobs does a great job of reviewing the evidence, or lack thereof, and his findings assured me that the worst health impact of a slew of bad nights is sleepiness and a bad mood.

This isn’t to say that sleep deprivation leaves us with our normal capacities. We all know the dangers of driving while overtired, and it’s important to be realistic about how much energy you have to keep the kids safe. There’s also sleep apnea, a condition that requires medical intervention.

But most of the anxiety one experiences with chronic insomnia is around sleep itself. Jacobs makes the important point that often people fear dire health consequences from not sleeping well where none exist. When we stop worrying, we’ll be less anxious before bed and about sleep in general, which helps us relax and disrupt the cycles of insomnia and anxiety.

Fact: The majority of people do not need eight hours of sleep.

Most of us can function fine on core sleep, which Jacobs says is around five and a half hours (although some do fine on as little as three). This amount of time contains all of our deep sleep, the most important type for functioning during waking hours.

He also cited research that people who habitually get seven hours a night actually live longer than those who get eight.

I felt the impact of this information immediately. My body released years of fear around not getting the amount of sleep I thought I needed. This undoubtedly helped me break the association between not sleeping and danger, which were contributing to the insomnia.

The myth of the ideal eight-hour night is just that.

Fact: The underlying causes of insomnia are usually beliefs/thoughts and habits, which one can change.

This was the hardest for me to swallow. At first, I wondered if Jacobs meant to dismiss insomnia as being “all in my head.” But he states clearly that he doesn’t believe insomnia is a mental illness. He uses the placebo effect as a concrete example of how beliefs can literally change our physical experience. In one study he mentioned, 30% of patients who took sugar pills reported as much pain relief as other subjects given morphine.

Jacobs goes on to explain that people with chronic insomnia are plagued with “Negative Sleep Thoughts,” or NSTs as Jacobs calls them. These thoughts play in our brains throughout the day and reinforce insomnia.

“I didn’t get any sleep at all last night.”

“I am dreading bedtime.”

“Why does sleep come so easily for everyone but me?”

“I feel miserable because I didn’t sleep well.”

“I can’t sleep without sleeping medication.”

Jacobs suggests developing mindfulness around these thoughts and to intentionally substitute alternatives.

“I know nothing bad will happen to my health if I can’t sleep.”

“I can be fine with just my core sleep.”

“I am confident that I can make the changes necessary to invite good sleep back into my life.”

The brain is a powerful organ.

Fact: We are creatures of association, and we need to teach our bodies that “being in the bed” is associated with “sleep.”

Most people with insomnia experience a growing sense of worry as night approaches. The problem is that not only are we stressed by whatever has initially caused our sleeplessness, but we begin to be worried about not sleeping. We start associating the bed with sleeplessness and frustration. Bed becomes a cue for wakefulness and insomnia.

This is why Jacobs strongly recommends using your bedroom only for sleeping and for sex.

Fact: What matters in overcoming insomnia is sleep efficiency, not the total number of hours in your bed.

Another shocker. Normally, if we’re not sleeping well, we go to sleep earlier and let ourselves sleep later. But in reality, this only allows for more time in bed when we aren’t sleeping, reinforcing the mental association between bed and Not Sleeping.

Jacobs suggests going to bed later than normal and setting the alarm, making sure to wake up early at the same time every day.

He even recommends winding down in another room. Start reading on the sofa and then, when you feel the drowsiness coming on, head for the bedroom.

The second night I also stayed up until 1:00 but it was much more difficult, as I had gotten up early. I fell asleep within 20 minutes and was awakened by the alarm at 7:30 the next day.

On the third night, I went to bed a bit earlier, at 12:30, and kept the alarm set at 7:30. I fell asleep within ten minutes. In the morning, a curious thing happened: I woke up a few minutes before the alarm rang.

Within a week, I was going to bed around 10:15, falling asleep by 10:30, and, with the exception of a pee break or two, sleeping straight through to 7:30, feeling consistently well-rested.

Understanding insomnia in this new way made so much sense to me. During long periods of sleep deprivation, I became less and less classically sleepy (ie, yawning, falling asleep, feeling a lack of energy) and more jittery, anxious, and emotionally sensitive. I wasn’t even able to nap. My wakefulness mode was working overtime and my sleep mode had taken an unplanned vacation. This way of thinking about the problem affirmed my sense that my body had forgotten how to sleep. What was missing was knowing I could make choices to help it relearn, like working out at a gym helps us strengthen our muscles.

As humans, our body temperature changes throughout the day in a “Circadian cycle.” Early mornings, our temperature is at its lowest. Then it rises until midafternoon, drops, then rises again and reaches its highest around 6:00 pm. Several hours later it drops and continues to drop until early morning.

We are most awake and alert when our body temperature is highest.

Exercising is one of the best ways to get our temperature up. If we schedule our workout between two and six hours before bedtime, we’ll be able to optimally maximize our influence over body temperature to encourage good sleep.

Fact: What we eat at night influences our sleep; avoid foods high in protein, sugar, alcohol, and caffeine, and choose foods high in carbohydrates instead.

Recently, I started eating paleo, and my snacks before bed had been intentionally high in protein. Little did I know that eating a lot of protein leaves the body with a lot of energy;  I’m sure this was contributing to the recent bout of insomnia that led me to Jacobs’ book. Caffeine and sugar might be more obvious, but many of us aren’t aware of the myriad foods that contain them other than coffee and candy.

Fact: “Trying” to sleep usually has the opposite effect. Create ideal conditions to invite sleep instead.

Sure enough, when I made the changes, there was nothing I had to actively do once I turned off my light. Sleep just happened.

The book has other hints, like making sure to get enough sunlight, taking short naps in the afternoon, and learning the relaxation response, all of which I found helpful. He touches on medical conditions and factors that affect sleep, like room temperature, screen time, noise, stress, sleeping with a partner or child, and jet-lag, and tips on adjusting and making changes.

The information in this book gave me a sense of control over my sleep and a sense of relaxation around nights that don’t go well. I highly recommend Say Goodnight to Insomnia by Gregg D. Jacobs for parents and anyone else struggling with insomnia. You’ll discover how easy it is to get those dreams back!