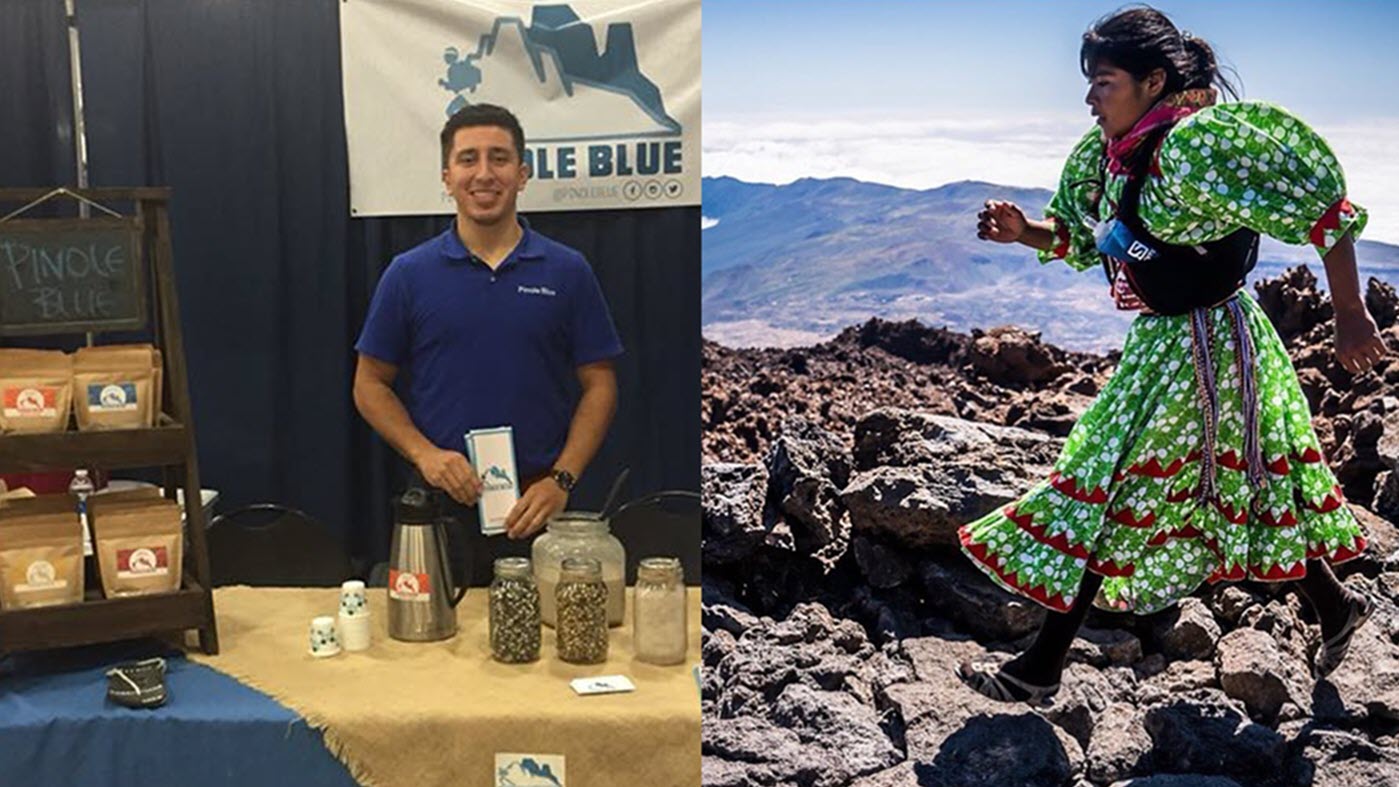 A start-from-scratch success story is inspiring and motivating for all of us.

Mike met Eddie Sandoval at an entrepreneur event in Wichita a couple of years back. The more questions Mike asked, the more he was impressed with both Eddie and his business. Since then, they’ve crossed paths at local running events several times and Mike continues to be impressed with who Eddie is and how his business is growing and evolving. With all of our high tech gear, precision diets, and complex training regimens, he thought Eddie’s story and his family’s roots from a famous running tribe in Mexico could give us an interesting perspective on how we prepare and support ourselves as runners.

Eddie’s life changed forever when he was just a senior in college. And now that he’s burst onto the market with his company, Pinole Blue, he’s determined to give back.

Eddie’s family lives in Kansas, but is originally from Chihuaha in Mexico. People there from the Tarahumara tribe consume a product called Pinole, organic blue corn meal roasted, ground, and mixed with spices. On annual trips back to Mexico, Eddie’s whole family joined the locals in using Pinole in smoothies, milk, cooked recipes, and warm beverages. Pinole contains a high concentration of antioxidants, as high as blueberries, and it also has complex carbohydrates which give the body energy slowly. It has 20% more protein than yellow corn. Pinole has been passed down by tribes in Mesoamerica since the time of the Aztecs.

Because Pinole wasn’t available in the United States, Eddie’s family would always bring some back after their trips to Mexico.

When Eddie was a senior in college, he couldn’t find a job and didn’t know what he wanted to do after graduation. In the back of his mind, an idea began to form. What if he were to bring Pinole to the United States and start a business? He ran the idea by his professor, who thought the idea was brilliant. US audiences had been introduced to Pinole through the movie, Born to Run, about the Taramuhara, their unusual way of running in sandals, and their use of Pinole as fuel.

That year, when he was on spring break, Eddie went to Mexico with his family and brought back half a ton of corn. He made Pinole in his garage and in a few months had 300 pounds. He realized he had to get serious, and in 2017, he decided to enter Wichita State University’s Shocker New Venture competition.

At just 24 years old, Eddie’s company, Pinole Blue, has a thriving online store and also has products in 140 stores in seven states, including Latino businesses, coffee shops, and athletic retail outlets. The company has diversified its offerings since winning the competition: it produces four different Pinole blends, including two protein blends and the popular pumpkin spice that tastes like chai. Pinole Blue has also started making cookies and will soon be producing stone ground tortillas.

But Eddie’s vision was much greater than just a successful business. He wanted to use Pinole Blue’s success to give back, to make a difference. In addition to providing a healthy product, Eddie wanted to give back to the Tarahumara, the tribe his family was a part of. So he decided to donate 1% of all profits to the tribe.

Pinole Blue is also proud to be sponsoring Lorena Ramirez, a female Tarahumara runner who has won marathons and ultramarathons in Mexico and around the world. Lorena runs in a traditional dress with sandals and competes with top-ranking athletes.

Next month, Pinole Blue will launch on Amazon. Eddie hopes to have products in natural grocery stores like Whole Foods and to get into international markets.

About his success at such a young age? “I tell my friends not to start their own businesses. It takes time and money and there’s a lot of stress, big decisions, financial insecurity. But I love it.”

As runners, we need preparation and planning. But we also need to connect with ourselves, with our particular history and story. In understanding where we came from, we can train and set goals with both risk-taking and care. Eddie is an inspiration to us all.