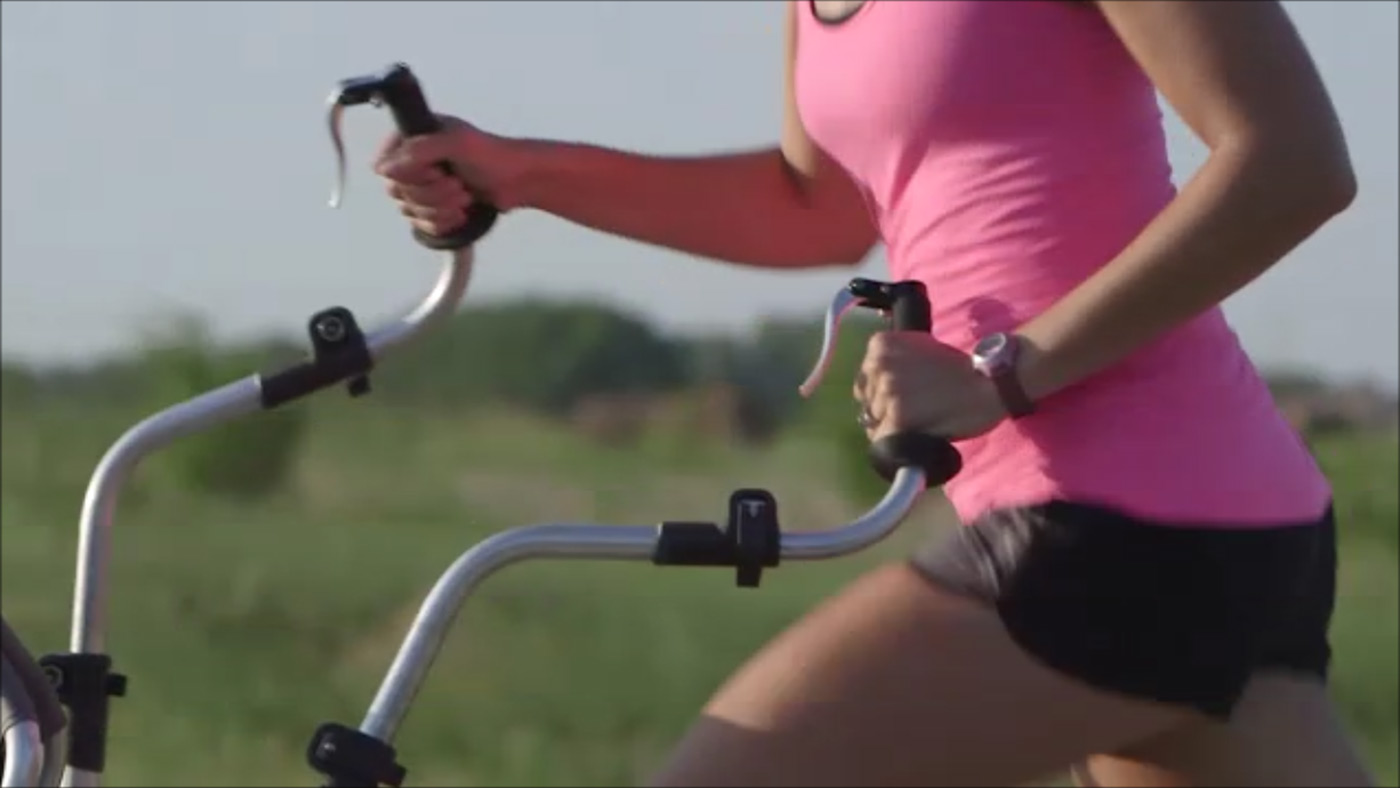 The “how” of the stroller arms is a question that I get a lot. If we are just passing in the park or you happen to catch us at a video or photo shoot, the short answer has become, “like an elliptical trainer.” Many of us have used an elliptical machine at a health club at one time or another, so that creates an image most can visualize. Early in the JogAlong project when people asked me the question, I would dive into more detail about the balance of forces and the connection between the stroller arms. Usually, during my lengthy explanation, the person who asked the question would start moving the stroller arms and would often remark, “this is like an elliptical trainer!”

“Yes, you got it!”  would be my response.  Then, while still moving the arms back and forth, the person often said, “this is really smooth.”  These are the moments we engineers live for.  It takes us years of work to achieve a certain result, and in an instant they are validated. We feel proud, speak a humble “thank you,” then we dive into the details again about balance of forces and the connections between the arms, as the listener’s eyes glaze over.

However, those people who immediately see a similarity to an elliptical trainer have it figured out, with one important exception. Most of the commercial elliptical machines weigh a couple hundred pounds or more. When the first fully functioning JogAlong prototype was made, while it didn’t weigh hundreds of pounds, it was much too heavy by jogging stroller standards. There were gears, a big aluminum tube to house everything, oversized bearings, lots of machined parts, and too many parts total. It was heavy, expensive, and hard to assemble,  but the concept worked.  You have to look at the positive side of things, I told myself!

Since that time, there have been numerous versions of prototypes built and even more virtually designed on the computer. Each time was a learning experience and the weight and part number total kept coming down. During that time, all the kids in my life were out of the stroller age, so I would run tests up and down my street with a bag of charcoal in the seat of the stroller. One of my neighbors was out working in his yard when he looked up, shook his head and said, “You aren’t fooling anybody!” and then got right back to work.  At the time, I just kept going, but it really makes me laugh today, because I think he could have called mental health services to have me evaluated! And while he was on the phone describing the situation, nobody would have questioned his reasons for doing so. But all those charcoal runs certainly contributed to making the JogAlong Stroller as light and fast as it is today.  As well as many suggestions from other users.

Because the stroller’s arms are connected (like an elliptical), when you push on one arm the other arm moves in the opposite direction.  Newton’s third law of motion, the one most of us remember, “to every action there is an equal and opposite reaction,” helps us imagine what’s happening mechanically when you are running with the JogAlong Stroller. The reaction to one of your arm’s forward force is an equal and opposite reaction from your other arm as those forces are transferred through the arms and linkage of the stroller.

Even though the handles are moving in motion with your natural arm swing, you are continually pushing forward on both handles and generating a forward force on the stroller. The great thing is after a minute or two when you first try it, you don’t even have to think about how you are using the arms or pushing. It just happens. And as we runners know, you get more out of your run with the freedom to run naturally than if you have to worry about pushing something that holds you back.