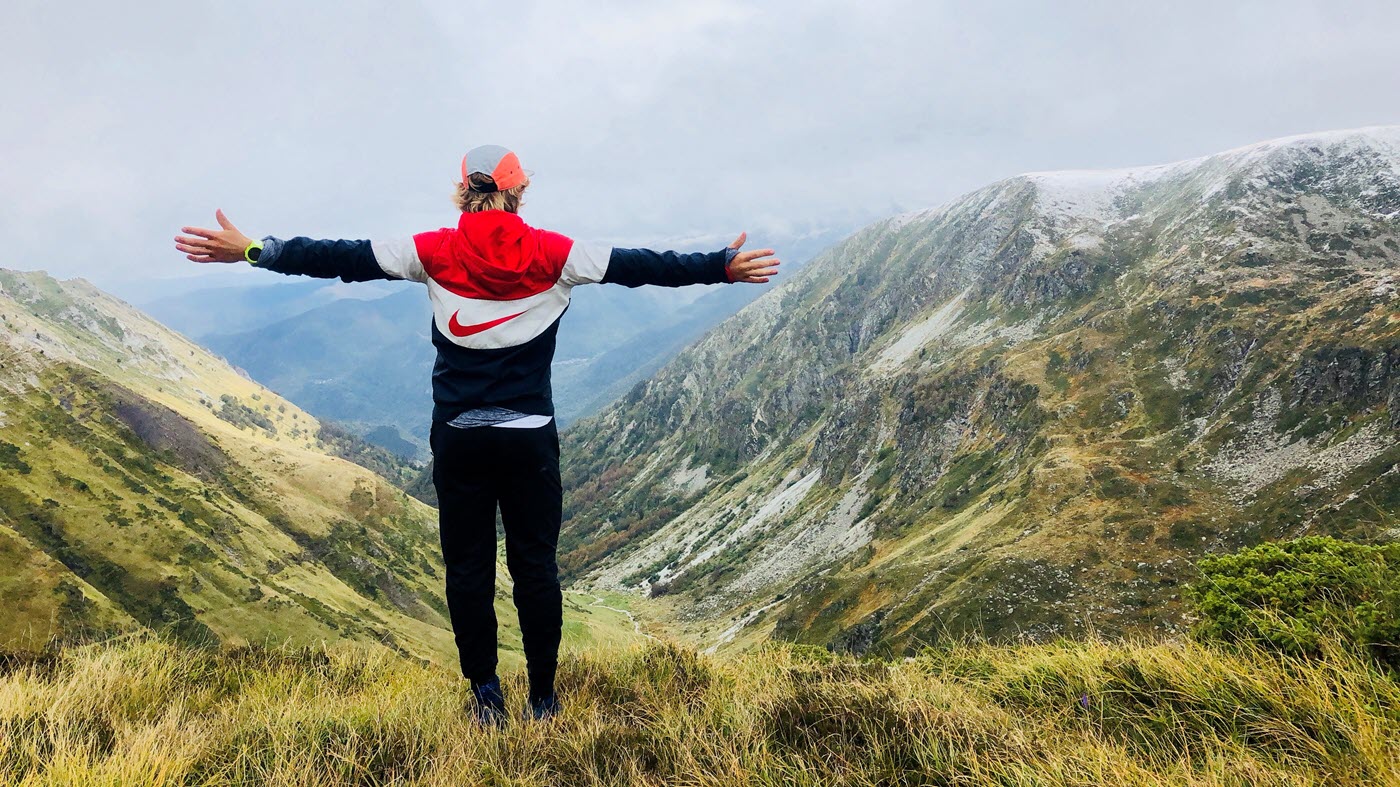 I took a deep breath and smiled. I leaned my body into the trail, my feet churning pieces of Moab’s famous red rock beneath me. The slope raised from a modest 3-4 percent to well over 10 percent. I had just run 15 miles and I still had over 11 miles to go in my first trail marathon, The Moab Trail Marathon, held each year in Southern Utah. The climb continued for what must have been almost 2 miles, but my smile grew as the trail took me higher and higher. I arrived atop a plateau over 1,000 feet above an oceanic space of nothing but slick red rocks. I would have been happy if that trail kept going up forever.

Trail running can provide a nature-lover’s adventure not found on the roads. Since becoming a trail runner, I’ve had the opportunity to run in the sunrise above San Francisco in the Marin Headlands, the thin air at 17,769 feet in the Himalayas, the French Pyrénées low-hanging clouds (photo above), remote villages in the Italian Alps, the Narnian winters and powdered-sugar snow of my hometown, Sandy, Utah, and awoke in the morning above 14,000 feet in the Colorado Rockies to find myself surrounded by a friendly crowd of early-rising mountain goats.

What is trail running?

Trail running involves a combination of running and, when there are steep gradients, “power-hiking,” and takes place on a wide variety of trails such as a foresty single track, ski slopes, snowfields, boulder fields, dirt roads, and much more. Just like road, track, or cross country running, trail running has its own races, training gear, training methods, and professional athletes.

Running trails has unique health benefits not achieved by running roads. The regular twists and turns and unevenness of trails can improve runners’ balance and proprioception, and can also strengthen muscles groups not normally used in other types of running. The ups and downs of trails require larger muscular efforts in addition to cardio. Downhills in particular involve eccentric loading of the leg muscles, which means the muscles lengthen as they contract. Eccentric training has been shown to improve muscular strength significantly. Additionally, the softer surface of trails, as compared to roads, greatly reduces the impact stresses on the ankles, shins, knees, and hips.

Running trails can improve mental health too. Running in nature provides an escape from an otherwise hectic, busy day; listening to the sounds of birds, trees blowing in the wind, or finding a moment of “mountain silence” are all effective for lowering stress levels.

Join a Laid Back, Fun, and Adventurous Community

I was offered a beer upon crossing the finish line of the 2017 World Long Distance Mountain Running Championships in Premana, Italy. I thought about my age, 20, and the originality of being offered a beer immediately after running just over 3 hours in a challenging world championship event. Trail runners know how to race hard, but just as importantly relax and mingle with fellow competitors. At larger trail events, one can often expect a post-race party filled with yummy foods, drinks, and music.

“What’s your mile time?” “What’s your marathon PR?” The attention to running PRs and times on the track or road is not a concern for most trail runners. Trail running is about enjoying time in nature and overcoming the challenges of the trail, not necessarily setting PRs. This leads to a more relaxed and less competitive environment than I’ve experienced when running track or road races.

The American Trail Running Association offers free access to the world’s largest online calendar of trail races, articles on trail running and other resources, such as how to find trails near you or research trail shoes.

The Ultimate Guide to Trailrunning, Trailhead, Relentless Forward Progress: A Guide to Running Ultramarathons, and Hal Koerner’s Field Guide to Ultrarunning are also great resources for learning how to train for the trails.

Get some mud on your shoes. Let the mountain goat be your spirit animal. Enjoy adventurous, healthy, and happy running on the trails.

Tayte Pollmann is an elite mountain and trail runner sponsored by Nike Trail Running. He works as a Project Associate for the American Trail Running Association where his duties include writing and sharing articles and short videos from his travels across the United States and overseas. Connect with Tayte on social media to learn more about trail running or talk about adventures in the mountains.