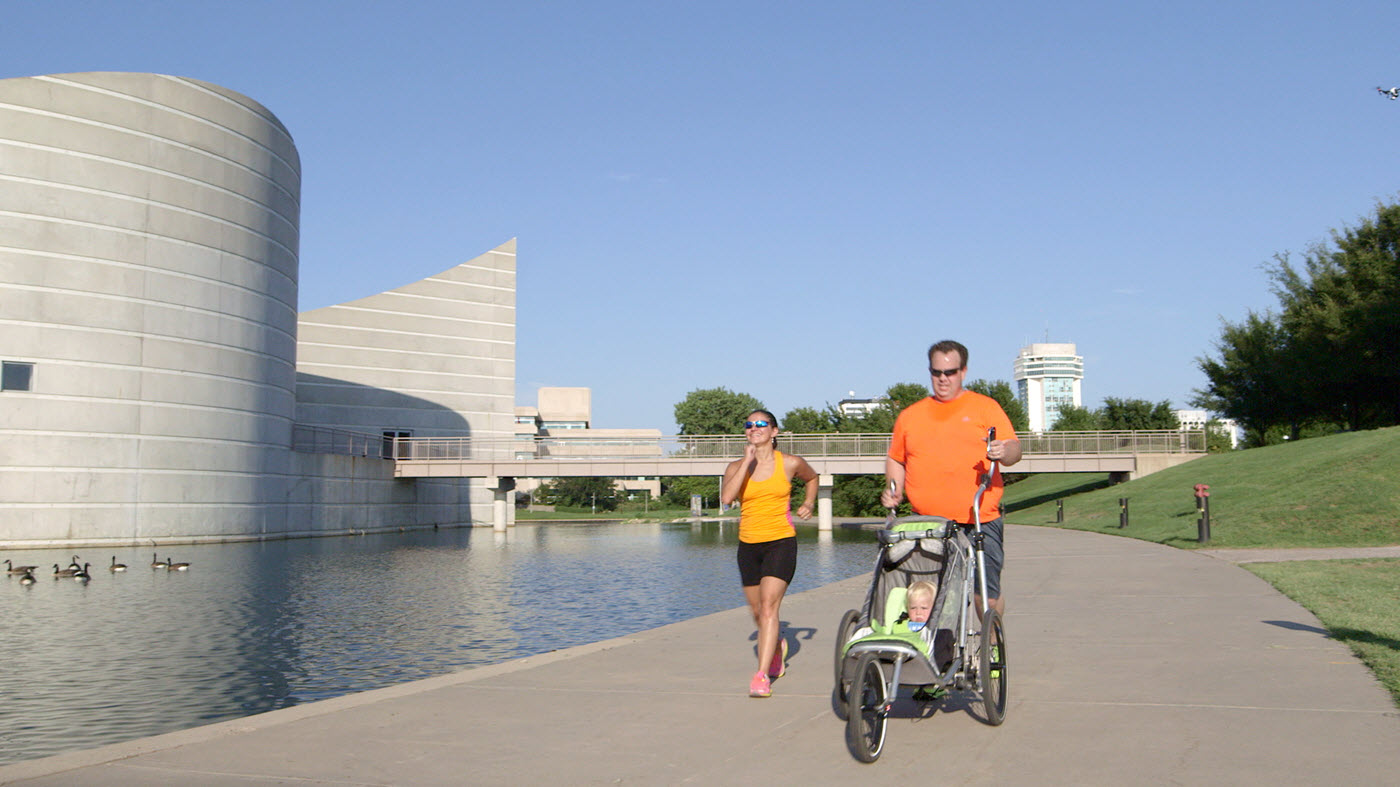 Some of you may be wondering: what’s the process like designing and creating a product like the JogAlong?

The first step was having the initial idea. That was back in 2002. I admired parents who made their child part of their exercise routine, getting them outside to experience nature and fresh air.  I also am a runner and know when your natural form is altered by something like pushing a traditionally designed stroller;  it’s not comfortable and makes it more likely for you to cut your session short.  With that in mind, I wanted to reward active parents with a product that gave them the freedom to run how their body was designed to do.

In 2003, I wrote the “Think Bio” (as in Bio Arm; thankfully, marketing minds later prevailed on the name!) business plan while taking a course called Engineering Entrepreneurship. At the time, I did not have a working solution to the stationary bar stroller, but after my research and interviews for the course, I realized that if there was a solution, there would be demand for the product.

After much trial and error, the reciprocating arm system was ready and, with some guidance from some State of Kansas organizations designed to help entrepreneurs, I decided that the best thing to do would be to license the arm technology to another stroller company.  While we had strong interest from several companies, we got tied up for seven years with the US patent office. Our prospects didn’t want to sign up without a patent in place, and I couldn’t blame them.

There were around ten full prototype versions, many more sub-assembly trials, and thousands of parts modeled on the computer. We learned something from each and incorporated that into the next version. 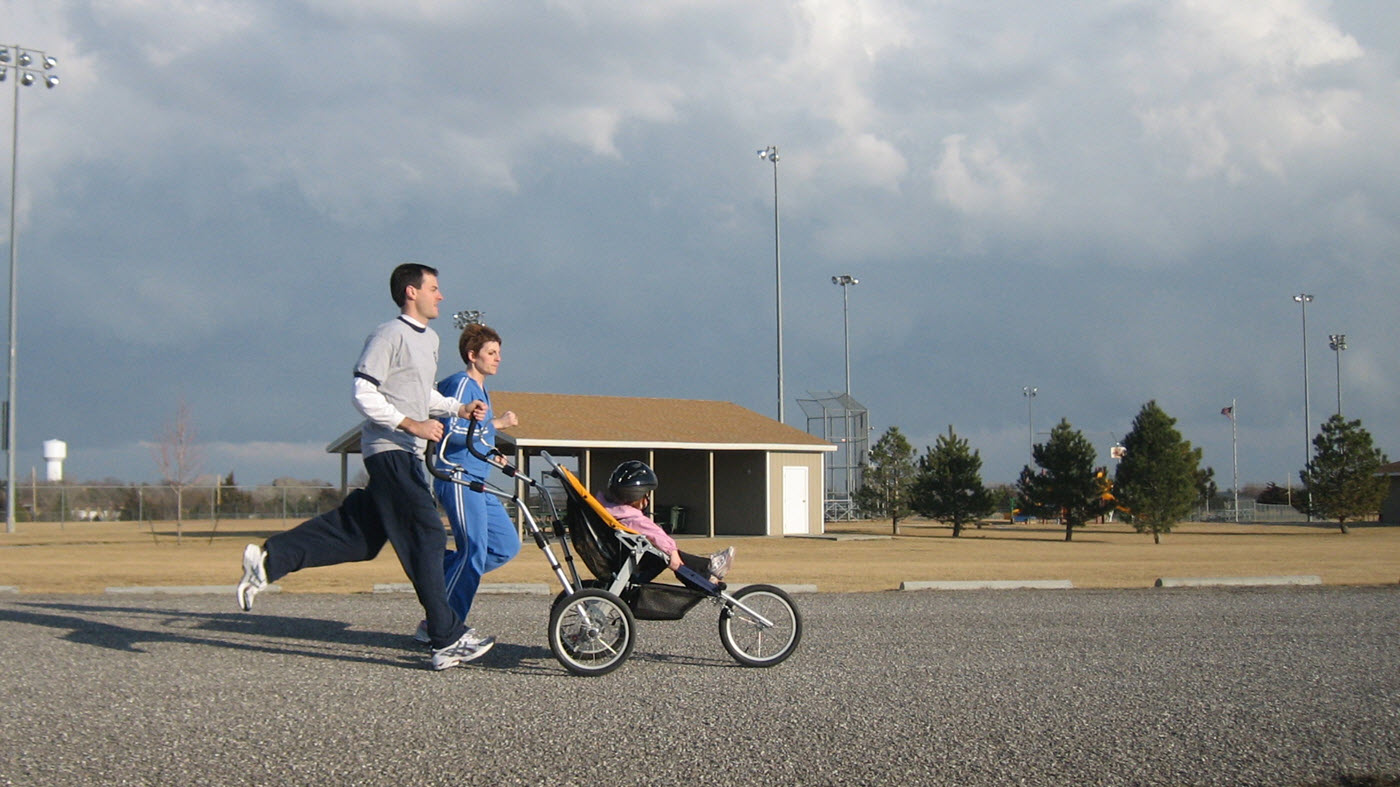 In 2006 Jeff, Carisa and Emersyn took the first runs with a new prototype.
Image by Mike Dresher

In 2006 we also got a positive review from the Innovation Institute:

I have not seen a stroller better suited for use by a dedicated runner.  It should be easier and more natural to use.  Therefore, it is likely that runners will use the stroller more frequently and perhaps for a longer period of time.  This could have an additional health benefit as it might imprint the importance of exercise on the child.  Children often imitate their caregivers and form many of their attitudes fairly early in life.

By 2012, with all of the patent issues resolved, our focus changed regarding how to get a stroller to market.  The patent delay turned out to be a big positive because what once was just the stroller’s arms developed into a complete jogging stroller designed around the arm technology. Today, we include the bike kit and standard stroller kit, making it a full-featured product with versatility and value.

In 2013 Greg, Carrie, and Michelle at Deviant 9 Studios designed and delivered a great fabric pod concept which we incorporated in to the design.

In 2014, I took my first trip to Asia to meet with potential suppliers. This step was not without consideration to manufacture in the US. Regardless of a final assembly location, many of the bicycle type components would come from Asia, and Taiwan in particular is a global manufacturing hub when it comes to bicycle components. There are high-end bicycle type manufacturers in the US and we talked to some of them, but it would have scaled the price up to a very limited niche market, and we wanted the JogAlong to be available for a larger group of people to enjoy the outdoors with their child. 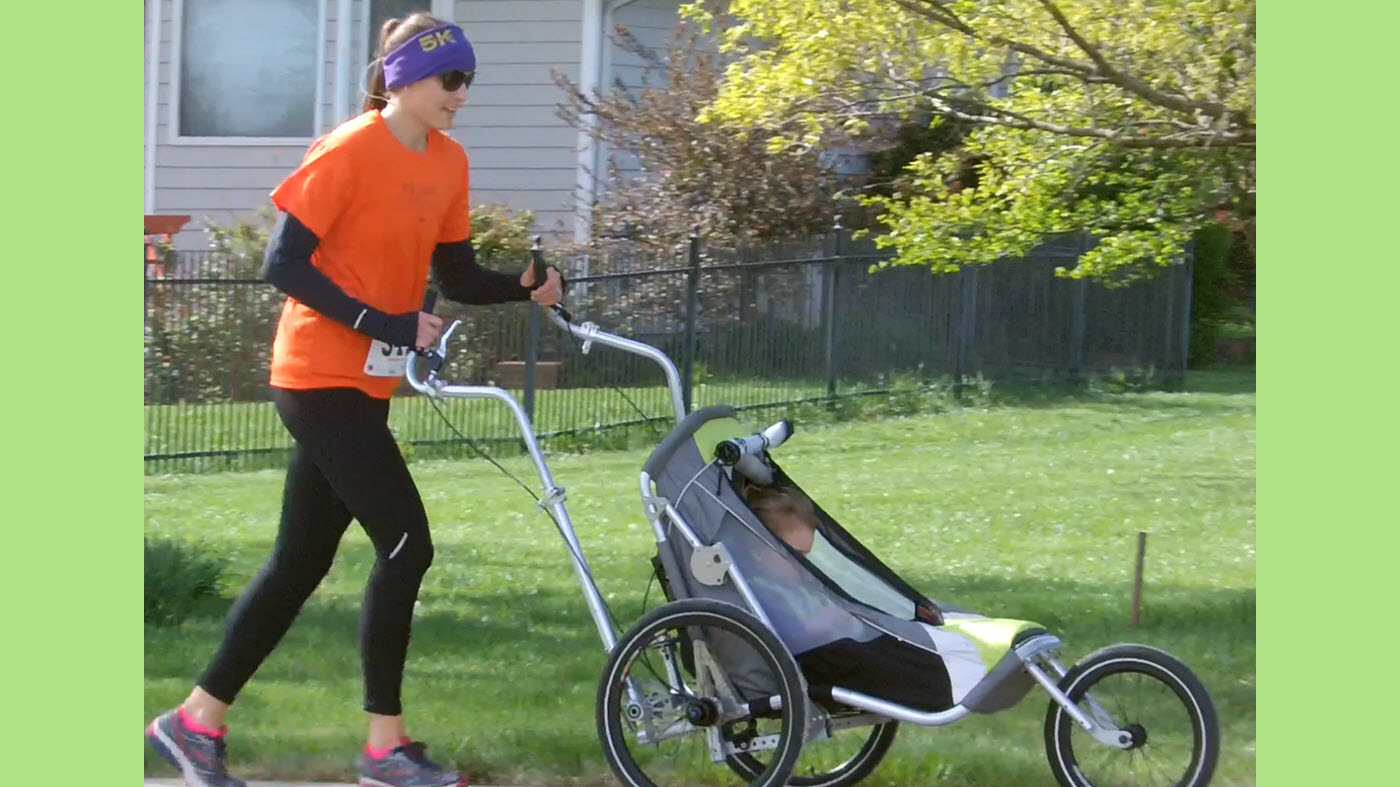 In 2015, Anna and Kolby debuted the production-like prototype in its first road race at the Emma Creek Classic in Hesston, KS.
Image by Mike Dresher

In July of 2015, I left my contract engineering job to focus full-time on the JogAlong.

As we approach the start of our crowdfunding campaign, I’m more excited than ever about this product. The JogAlong is unique in that it’s the first to address the biomechanical motion of our natural arm swing when we run. But it also works great for walking and power walking. Today, there isn’t anyone talking about a power walking stroller. The JogAlong enables you to get a great low-impact workout by facilitating the big arm motion of a power-walk. And that can be a great transition for mothers working back into activity after their child was born or people who don’t run or who are working their way into running.

Stay tuned for news about our crowdfunding campaign…the next step!