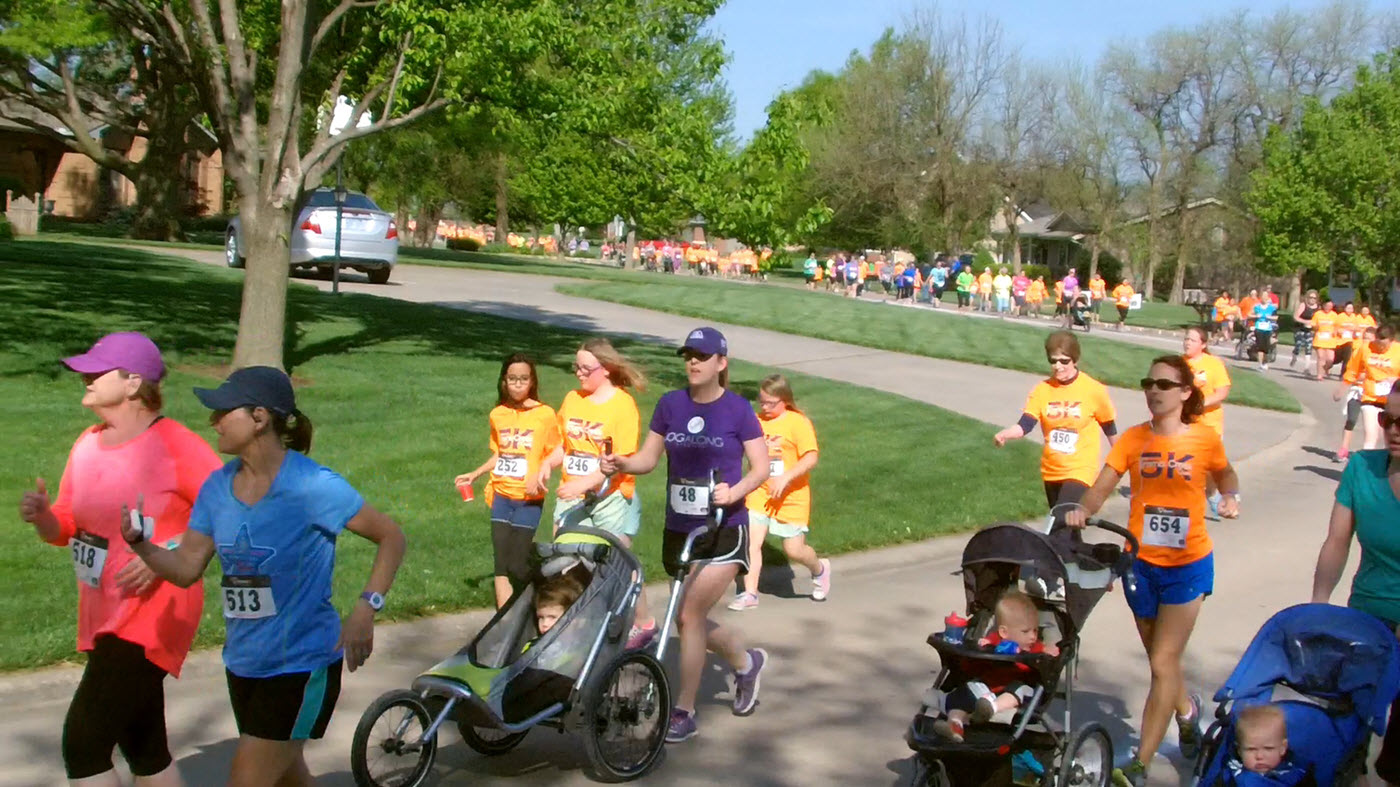 (Jogging strollers are tested throughout the process of developing and manufacturing their design. Companies locate people who are part of their target market to use the product and report back about what it was like. One of our early testers, runner and parent Becky Klaassen, agreed to speak with us about her experience with the JogAlong.)

GMS: How did you first get involved with JogAlong?

BK: It was through Facebook. I was looking around on my feed and I saw a friend who went to my high school. I later found out she was also a neighbor of Mike’s in Wichita and had been involved with some early photo shoots and testing for the company. So I watched some video of the JogAlong jogging stroller and was immediately excited. I remember thinking, “Wow, what an amazing stroller! You can actually move your arms!” I messaged Mike right away because I was curious about how the stroller handles on certain roads, and I offered to be a tester.

When Mike and I connected, on Facebook, we realized a funny coincidence. The town where I live, Canton, is where he grew up; I grew up in Wichita. It was like we switched places. Mike said yes to me being a tester and the next time he visited his dad, he dropped off the stroller. I got to use it for awhile and I loved it.

Becky’s feedback on the stroller

BK: I love the moveable handles. I was able to move my arms naturally, both with walking and running, and it felt to me like the stroller was pushing itself. It just went without any effort. It was far from the usual struggling that goes with a regular stroller. With the JogAlong, I was able to go at least twice the distance I had with my other stroller. It was far more comfortable and my arms weren’t fatigued.

Also, the suspension is great so my son had a much smoother ride. At my home, we have a 1/4 mile-long gravel driveway that I walk/jog to pick up the mail each day. It was great to have the JogAlong to jog out to my mailbox with my son, knowing the little guy wasn’t being jostled around.

There are other features it had that worked well for me, like the mesh in the compartment where the child sits. It was nice to be able to keep an eye on Lance through the peek-a-boo window and to talk with him as we went. Also, around my property, sturdy tires are crucial for us to get over gravel and dirt and sometimes grass and sand roads. I also liked the zip-down windblocks on the JogAlong. It’s windy here and its nice to be able to zip up those flaps and my little guy can be shielded from the wind. And being able to brake is great. I have brakes on my other stroller but on the tires. This is a good feature for a jogging stroller if there is an incline or decline.

Racing with a jogging stroller

GMS: You ran with the JogAlong in the Emma Creek Classic women’s race in April. How did it go?

BK: This was my second time running the race. It’s an awesome all women’s race in a small town, but it actually draws people from all over the state and even other states, like Colorado, Missouri, and Oklahoma. I looked at the results afterwards this year: 830 people raced, which is big turnout for a town the size of Hesston which is near Canton. The community also had been through a tragedy recently (a shooter killed four people, http://www.cantondailyledger.com/article/ZZ/20160226/NEWS/302269967) and it was neat to see everybody come together. The community was hit hard but you felt the spirit, #HesstonStrong. The incident wasn’t a focus at the race, but it did happen recently so it was in the air.

Running in a race with a jogging stroller for the first time, especially the JogAlong, was neat. People came up to me, actually during the race, and they were commenting on it. “I’ve never seen a jogging stroller like that, it’s awesome, you can move your arms, that’s cool.” Everybody seemed surprised and interested in it. And my son enjoyed it too. We ran by horses and cows, through a park, near some boys playing soccer, and there were also all the other runners going by at different points during the race. He took it all in and didn’t fuss at all which I appreciated.

BK: I really like the camaraderie. I’ve done several, including one half marathon in Wichita with all women, See Jane Run (http://www.seejanerun.com/races/). There’s so much encouragement on the course, both before and after the race from the other ladies. You see women of all ages, athletic abilities, and backgrounds celebrating getting out there and being active.

BK: Enjoy the little things like cuddling and baby giggles. Living in a rural area can feel like an island if you don’t leave the house for awhile. It’s easy to get cabin fever, so I’ve tried to stay active and get out of the house, even when my son was very little. I try to be social and stay connected to family, friends, and our community. Even a trip out to the grocery story or a local park to walk around is good for us. A reliable stroller is invaluable because it gives parents the freedom to go anywhere needed and even be spontaneous, all while knowing your little one is safe while joining in on life’s adventures. Be confident in your parenting skills and know you have the strength and grace you need to meet each challenge and help your children grow.

GMS: And for new moms who are runners about getting back into shape after giving birth?

BK: It was very helpful for me to walk a lot at first. I started running in intervals, jogging, walking, jogging, walking, and I would slowly increase the jogging distance. It’s good to ease back into it gradually. I felt pretty good with that kind of pace.